In death and darkness

The title of this post is quite apt as you probably thought that we were dead and we have most definitely kept you in the dark for quite a while. However, there is no need to fret for we have been alive and active.

And we return bearing good news:In the following weeks, our first ever published story will be available for sale on Amazon in digital format at a very reduced price!

In Death and Darkness is a short story featuring vampires and romance in the LGBT genre written by our alter-egos (yes, we have a few...) Caelan White and Kendall Frost.

We leave you with the official synopsis of the book and the cover.


"Johannes has spent over 400 years tormenting himself over the events that took place the evening he was turned into a vampire. Blinded and celibate as atonement, he merely goes to the motions of his eternal life. That changes when he accidentally meets Alexis, a guy that suffers from crippling seizures. With Alexis, Johannes will realize that nothing is truly lost." 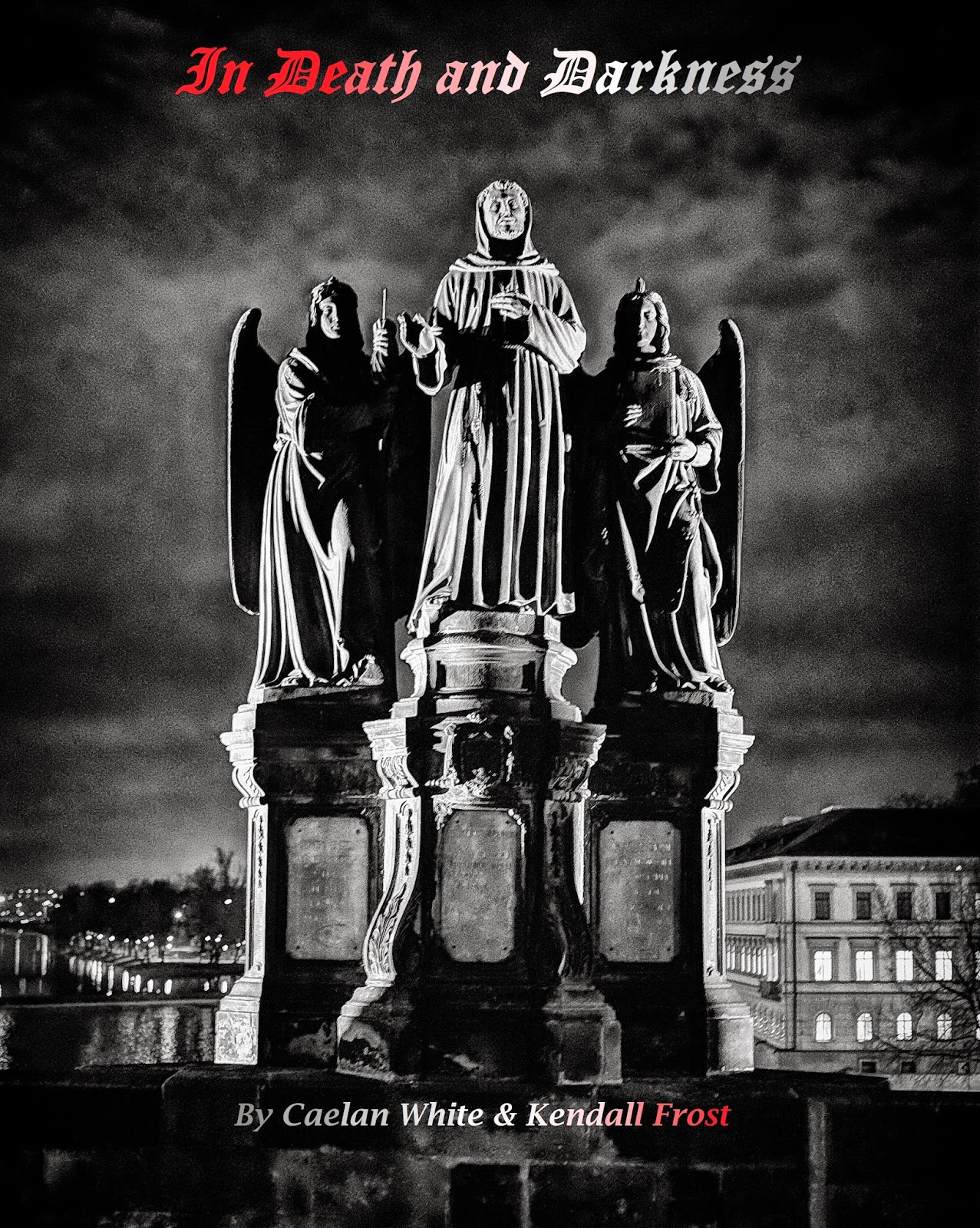 Just wanted to let you all know that we are made of awesome. Of really cool, ass kicking AWESOME.

Now you can all comment here and confess: none of you really expected us to win this year’s NaNoWriMo, did you? We already knew, that was the only reason that kept us going through the entire month: the pleasure of looking into your disbelieving eyes and saying: We made it! So here we are now and we are saying it, well, rather we are screaming it from the top of our lungs: WE MADE IT! Besides the personal pleasure that we are getting from winning something in our lives, we also got something else. We got two new drafts that will soon become the first two books in this new series we have been talking about for the last few months. It’s still going to be a while before you’ll be able to get pre-reading manuscripts because writing that fast didn’t allow us much time to stop and polish the details, but we will get to that soon. For now we are going to leave you with a teaser about this new series: You will get to meet 11 different forces from the universe that happen to be brothers and sisters (seven and four anyway). You sure have heard about them before, but no one has ever told you their true story; that’s what we are here for. So I’ll stop here for today, just let me add one last thing… …

Update from the depths of the literary void

Yes, we know it. We know that news from the front have been scarce in the last months and that some of you might have feared that we had fallen before the enemy. However, I can assure you that this is not the case, we are both alive and kicking.

In fact we have been very productive lately. As we informed you some time ago, we held a meeting in Paris. Yeah, something like a very secret reunion surrounded by some people that we then had to kill because they had heard our best kept secrets… Well, not really; but we did meet. During this week we managed to come up with several different things.

To begin with, we finished the first draft for The Forge of the Prophecy. Yes, you read it! The story is now written, we know how it begins and – most important – we know how it ends. After lots of plotting, planning and some crying, the story came together as a whole. Needless to say how proud we are. Soon enough we will start working on the final draft, we already have a lot of ideas of what needs to be included or changed. The wait is slowly coming to an end.

But that wasn’t the only thing we did in Paris, not by far. As we were there NaNoWriMo started. We had already planned a new series (yes, who wants to write a book when you can write a whole series?) and decided to use this opportunity to write the first two novels. We love the concept and we had really good ideas, and we are confident that you will like them as well when the time comes for you to know more about them. I also have some cool news from some of you: this new series will be written in English! We had a really fun NaNoWriMo kick up with some other writers.

I know you want the information about this new series, but you are still gonna have to wait a little bit, though we will be sharing more and more information regarding this series with you.

I hope this update is enough to prove that we haven’t disappeared into the abyss of literary doom and we will try to update you as often as possible. As usual, we are going to need “beta readers” for the new series, so if you are up to the task just let us know.

Cheers!
Posted by Akitania at 4:19 PM No comments:

I know we haven’t been around here a lot lately, but life is a bit crazy at the moment. We will try to share a piece of our minds with you all more often. However, we think that an update would be nice.

We are 4 chapters away from the end of La Forja de la Profecía, which means that the first draft should be ready by the end of this month (latest). This plan (schedule) should give us some time to advance a lot in our new series during NaNoWriMo. This will also be the time when some people will get the Spanish version and the chance to send us their comments.

Hope this is some light at the end of the tunnel for you all, as much as it is for us.

Next week we will meet in Paris and update you all on our progress. For now, I will give you the statistics for the draft as of today:

Lately, I have been noticing this strange phenomenon in our lives: people are trying to give us orders. Yes, as you read it, people are trying to tell us what we should do, rather what they want us to do. It is something that started happening as we advanced in the book, when we had about 10 chapters ready. Of course, it might be our very own fault in some way, considering that we were the ones that allowed some “lucky” friends to read those first chapters. At the time we really had no idea that they were gonna like the story so much. You may be thinking that that is a really good thing: your book is meeting a good reception in your small readers community. What else can you wish for when you decided to become a writer? And yes, you are all right, that’s an amazing thing, but it was also the beginning of all our troubles: that was the moment when people started telling us to go home and write instead of going out for a beer. And not happy with just that, they also started asking when the next chapter was due and nagging us to write, even suggesting a different path for the story. So far they haven’t fully succeeded (although a couple of new scenes and a few minor changes might disagree with that), but if they continue to insist, we might be leaving our social lives behind. And that could mean disaster, since it's surrounded by people and scribbling notes on paper napkins where we get our best ideas!
Posted by Akitania at 11:13 AM No comments:

Gathering of the ideas

So, your plot is finished and it's time to gather ideas for a new book. NaNoWriMo is getting closer and, of course, you decide that a series of seven is the way to go. And besides knowing that there are seven you have no friggin' idea of what the hell is gonna happen... and you don't just need one plot, you need seven!!!! There is no way in Hell to get seven plots in less than two months, so it's time to get the creative juices flowing or rather do a lot of beer (or berr, as you spell it after a couple of them) drinking and character summoning in the weirdests places you can imagine. Your days of sleeping siesta or reading a book in the toilet are over until December. You mention your idea to a small circle of friends hoping they don't steal it and come up with interesting twists for your story. You take your notebook and laptop everywhere and you find out just how many places have free wifi, you wake up with odd names and new characters having sneaked into your dreams.

We are at the point in which it's much easier to think of new ideas than to finish the one we are actually writing. We are slackers, I know, but since we can't be bothered to write, we just settle for a blog post.
Posted by Sirannon at 12:12 PM No comments:

Today we are proud to make a big announcement: We are 10 chapters away from the end of the first draft of La Forja de la Profecía (which may or may not, but it’s very likely to keep the title, we still have to decide). It might not seem a big achievement, but if we complete it, it will have been the closest we’ve ever been to writing a book (the first of many, we hope).

We certainly didn’t expect to make it when we first started talking about writing a book, but all of a sudden we had a story and a few thousand words, so we kept writing so that our words wouldn’t feel lonely. And our interest in the welfare of our words soon gave place to too many words to be let to waste, that’s when we realized that we were going to write a book, because we had already created something that had to be finished. So, without almost noticing itbefore we even really noticed, we had half the book in our hands.

So, today, when we look towards the end of the story we see a downhill path (and you know we don’t really use brakes that much). At the beggining it was hard to get the whole thing in motion, but now the task feels a lot easier. We will try to complete the draft by the end of october and then *wink* *wink* we will need beta readers*wink* *wink*
Posted by Akitania at 7:50 PM 1 comment: